OUT OF TRACTION, BACK IN ACTION!

well not that I've actually been intraction (so you're lying then? ED) well it's the thought that counts.....er, I mean it's poetic license.....(Have you got one of those cos let's face it your driving licence didn't help you much did it?! ED) Oh shut up! Let me get on with it now I have permission to type and am back on the full-time work situation I need to catch the guys up with some Zimmy and some Groobin Stooves!

Annnnnyhooo, here's the link of links to the last concert of the year 2012 of Neverending Tour for
His Bobness!
This from the concerts with The Sultan Of Swing hisself, Mark Knopfler 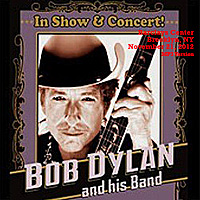 Now, I have not checked this out yet but Big O says the following so you have been warned . . . . . Chuck Armstrong wrote at ultimateclassicrock.com:


Less than half an hour after [support act Mark] Knopfler’s performance, Dylan and his band walked out on-stage and immediately broke into 1967’s You Ain’t Goin’ Nowhere. As typical with any Dylan performance, there was no chit-chat with the audience, only rocking song after rocking song. The only time Dylan took a break from the music was to introduce his band, which consisted of long-time members like bassist Tony Garnier and drummer George Receli, as well as pedal steel guitarist Donnie Herron, guitarist Stu Kimball and a legend in his own right, guitarist Charlie Sexton. Dylan’s set included classic tracks like Highway 61 Revisited and Tangled Up in Blue, and he also jammed on two brand new tracks from his latest studio album, Tempest - Early Roman Kings and Soon After Midnight. Playing mainly on a grand piano, Dylan also spent some time behind an electric piano as well as showing off his phenomenal mouth harp skills with his harmonica. From Knopfler joining Dylan and his band onstage for a handful of songs to the encore of the one and only tune, Blowin’ in the Wind, Dylan’s final scheduled performance of 2012 exceeded expectations. Fans might also want to search out a copy of the JF Master version of this show. While it is also an audience recording, Dylan’s vocals are clearer and the sound is much brighter. Unfortunately, the original uploader does not allow it to be shared lossy.

For those of you not happy with trying to scrape around in the penny jar to raise your £950 for a Stones ticket to watch a bunch of septuagenarian's looning around through the wrong end of a looking glass here the MEWSIC! 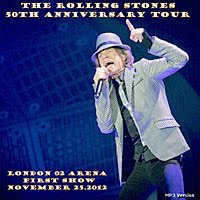 I dedicate these two boots to the memory of my dear dear friend Stephen Blackman who rekindled my waning interest in both Bob and the Groobers some years ago now so that we became obsessed (again)and as I have mentioned we went to see His Bobness at The Roundhouse gig back in 2009.

Great to see you back. I've listened to bits of both and enjoyed Mick Taylor particularly. That period of Stones was the last time(!!!) for me that they made great music. Was lucky to see their Farewell Tour in 1971. Don't laugh.