again from the legendary and wonderful site Big O my second call for music and often contains reviews of naughty Singaporean films here's a different one  , . . . . . . . 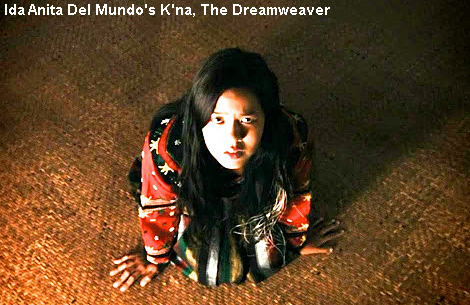 Ida Anita Del Mundo’s K’na, The Dreamweaver (2014) might be a flawed first feature but like the heroine in the film, Del Mundo is still a dreamweaver in her own right - she’s not only the repository of dreams but also one who is spinning brand new visions. By Critic After Dark Noel Vera.
Ida Anita Del Mundo’s debut feature, K’na, The Dreamweaver (2014) feels so very much like a fable of long-ago Philippines it’s only fitting that woven into its fabric are other fables, bright threads laced into a dark tapestry.
Like the story of how the tribe found itself on the southern shores of Lake Sebu: a weaver of t’nalak cloth named Hanyas has become so known for her weaving skill she is chosen to become the chieftain’s fifth wife; she loves another, though, and runs away with him. For revenge the chieftain banishes Hanyas’ family and friends to the lake’s southern banks - and there we find K’na (the lovely Mara Lopez) and her tribe.
Of course fables - and what are fables but history summarized and simplified, for quick absorption and easy remembering? - tend to repeat themselves, and the heroine of this story, K’na (which in T’Boli means ‘dream’), is doomed to a similar situation.
K’na aspires not just to be a t’nalak weaver but a dreamweaver, and trains under her patient Be (grandma), Lamfey (Erlinda Villalobos). As the film progresses Del Mundo defines the dreamweaver’s position in society: she’s the community’s premiere artist, the repository of its history, identity and (most important) dreams. Be Lamfey tells K’na what happened after their family was banished: how they struggled for ten years without a dreamweaver, how lost they felt, how they only started dreaming again when their youngest (Lamfrey as a young woman) started learning the art.
The dreamweaver is central to the tribe’s cultural, spiritual and imaginative life, same time weaving plays a central role in her life - dreamweaving is a personal act, drawn from the weaver’s own visions. It’s also physically personal, as the width and various measurements are marked by the lengths of a weaver’s own body: a handspan, for example, is from the tip of the weaver’s outstretched little finger to the tip of her outstretched thumb; a yard is from her armpit to the tip of her middle finger; and so on. Just as hand sizes and finger lengths differ from person to person, so do each and every weave. 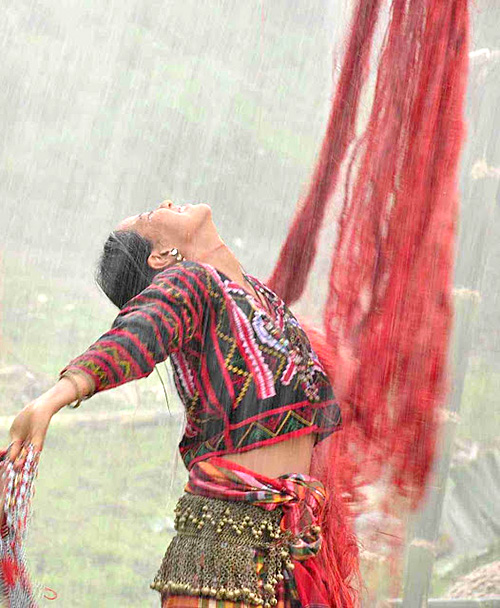 Del Mundo tells a simple tale, and her style is equally spare: outdoors she employs long shots that drink long draughts of the community’s surrounding green landscape, from the velvet forest leaves to the deep jade lake waters; indoors her lighting is softer, to bring out the lustrous waxen glow of the cloth.
Best of all is the color palette: t’nalak cloth is famous for the brightness of its colors, and again and again Del Mundo ravishes us with endless swathes of dark crimson, abysmal bands of black, the strange creamy pearl of naked abaca - of the undyed threads that run between the red and black. At one point K’na playfully argues with her lover Silaw (RK Bagatsing) on the meaning of the different colors: K’na insists on a historical bent (red is the blood of heroes) while Silaw has a more personal interpretation (red is for his passion, black for his despair).
The colors have such intensity they unfortunately tend to drown out Del Mundo’s dream sequences: where everyday life can boast of near-psychedelic colors, the dreams come off as wan, soft-focus interludes. She’s yet to learn what fellow Filipino filmmaker Auraeous Solito learnt in making his Busong: that to the indigenous the fantastic and the everyday have equal importance, are equally real, and should be photographed accordingly.
Del Mundo is also so obviously - and understandably - in love with the beauty of T’boli weave and culture she seems reluctant to include its darker threads: the tendency towards tribal warfare, for one (Gerardo de Leon in his own epic telling of precolonial history [Banaue: Stairway to the Sky] would stage spectacular battles sequences where decapitation by bolo - the heavy Filipino blade designed to lop off both tree branches and human limbs - is a constant palpable threat); the tendency to treat women like chattel, bargaining chips to be tossed on the table while negotiating peace with an enemy tribe.
Del Mundo does manage to suggest what’s at stake in one particularly memorable moment: when the unhappy bride steps into the honeymoon suite, the curtain that falls across the doorway is menstrual scarlet. We remember the lovers’ earlier argument involving color and, to their differing definitions, we can add one more: red is also the color of sacrifice.
The film is a flawed first feature; sometimes the neophyte’s awkwardness is appropriate to the tone of a childlike fable, sometimes it isn’t. I would have like to have gone deeper into other aspects of T’Boli culture - their food, for one, which is heavily into root vegetables, fresh-caught fish, and that deliriously delicious mountain-grown rice (so nutty and flavorsome you only need to add salt for a satisfying meal); then there’s their true origin story, which involves a biblical flood and a giant bamboo vessel carrying survivors… but that’s reason enough for a sequel, hopefully; for Ms Del Mundo to revisit what she has already so memorably depicted onscreen.
Note: You can also email Noel Vera at noelbotevera@yahoo.com.
Click here for more movie reviews.