Here's Wishing all my readers [huh?] a Happy New Year of The Monkey 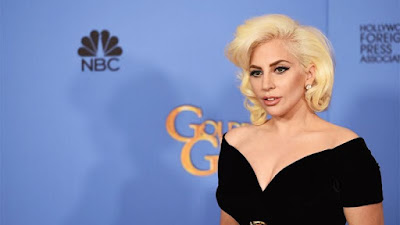 Lady Gaga has quite a schedule in the coming weeks. On Sunday, Feb 7, she will be performing at Super Bowl 50 in California's Levi's Stadium, in Santa Clara where she will sing the National Anthem, The Star-Spangled Banner. Any hope of an outrageous performance like Hendrix's will likely be in vain. Then there's her seven-minute slot at the Grammys on Feb 15 at the Staples Centre in Los Angeles, where she plans to perform three or four David Bowie songs with direction from Nile Rodgers of Chic who also produced David Bowie's big '80s hit, Let's Dance. Finally, Gaga will also sing during the Academy Awards on February 28th. Gaga and Warren are nominated for "'Til It Happens to You" and will perform the tune. 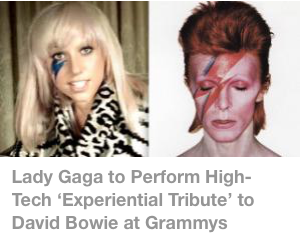 If you can have rum (and raisin) chocolates and ice creams, you can now take a break with a Kit Kat and a shot of Japanese rice wine all rolled into one. Japan is well-known for its huge variety of Kit Kats, with flavours ranging from wasabi to soybean and purple sweet potato to red bean sandwich. Now, the success of the Green Tea Kit Kat has encouraged Nestle to develop another Japan-exclusive flavour, this time based on the country's well-known traditional brew, nihonshuu, or sake as it's known internationally.

The new Kit Kats contain sake powder which has been kneaded into the white chocolate-encased wafers, giving the chocolates all the flavour and aroma of a top-quality rice wine, while providing a light and refreshing aftertaste. Available from February 1, 2016, the new variety will come in three-pack boxes for 150 yen (US$1.24) at convenience stores, while the specially designed nine-piece box will be available for 700 yen from souvenir stores around the country. -rocketnews24.com

Former Sex Pistols frontman John Lydon has spoken about life at 60 following his birthday on Sunday (January 31, 2016). Lydon's post-punk group PiL released their tenth studio record, 'What The World Needs Now...', in September of last year, and the singer spoke to GQ about his advancing years in a new interview. Confirming that he is still smoking and drinking, Lydon said: "If I can't enjoy being alive, then I don't want to be alive. Drinking and cigarettes and having fun and staying up for endless days - these are all great attractions to me."

Stating that partying has "made him a better person", Lydon also claimed that the last time he exercised was "years and years ago... when my band PIL was first touring America". Lydon elaborated: "An American manager recommended it. I just wouldn't go to no gymnasium, not for anything. So, they rented this bloke who came around in a truck with all the equipment in the back. It was just too preposterous. It's like, these are muscles I don't need to use and I don't want, and I don't want to carry them around either. I'd much rather carry around vats of alcoholic debris. Body shape and size matters nothing at all. Everything I know about human beings - it's all in their eyes."

'IN $INGAPORE, YOU CAN BE ARRESTED FOR CHEWING GUM'

"I rip through a welcome and an introduction to the band in Chinese. It is received with dutiful sympathy by the crowd as my pronunciation is so dreadful that not one word is understood. The audience end of the ramp is so far away from the band that I am singing half a beat behind them. I look back and see a tiny, jumping Carlos Alomar leading a badly lit rock 'n' roll group. I peer out and see paramilitary cops at the ratio of about one to two with the first row. They finger their billy clubs, their hands on their guns.

My jacket style is designer Tokyo - skyscrapers and diamante searchlights. There is so much lacquer in my hair that a hurricane couldn't move it. My shirt is held into my pants by elastic thongs round my legs. I have two pairs of socks on because of oversized shoes. I am imploring the crowd, "put on your red shoes"... there is a scream of recognition -15,000 strong. A tiger-print-clad girl is slapped back over the security boundary by a ferocious swing of a billy club.

In a city where you can be arrested for chewing gum, a demand to put on red shoes is deemed unhealthy."

ME AND THE ELEPHANT WILL NEVER FORGET YOU

A Scottish man has died after being gored by an elephant in Thailand, local press has reported. Gareth Crowe, 36, and his 16-year-old daughter had been riding the animal when it apparently turned on its handler on the island of Koh Samui. The Bangkok Post said the 13-year-old elephant, called Golf, became agitated when its handler stopped in a forested area to take pictures, hitting the handler with its trunk before stabbing him in the torso with a tusk, causing serious injuries. It then threw Mr Crowe and his daughter from its back, trampling on Mr Crowe and goring him with its tusk, killing him instantly. When the incident was over, the elephant ran off into the forest. It had reportedly appeared upset shortly before lashing out, refusing to follow instructions.

The charity World Animal Protection said that while its thoughts were with Mr Crowe's loved ones, it was a "stark reminder" that elephants were not meant to be ridden. A spokeswoman said: "Elephants are cruelly abused to tame them enough so they give rides and perform in shows. Most tourists don't know about these abuses, or the potential danger they put themselves in. If you can ride it, hug it or have a selfie with a wild animal, then the chances are it is cruel and the animal is suffering." - News Sky
----------------------------------------
RIGHT ON LILY

THE LAST WORD "FROM LILY ALLEN"

Awards mean £££ and promotions. I don't think music industry figures (or people that work at major labels) even look at artists as artists when it comes to voting for these things, the artists represent their teams, their a+r people, managers, mds, pluggers, etc.

[They, Skepta, JME and Stormzy] are all unsigned artists, who would gain from them winning anything? In fact them being nominated or even winning poses a direct threat to 'music industry figures'. Imagine Skepta or Stormzy won, who would they thank in their speeches, who's ego would get massaged?"
Lily facebook
- Lily Allen on why the awards shows suck. She was writing on her Facebook page at the end of January, 2016.
Posted by Andy Swapp at 11:25 am