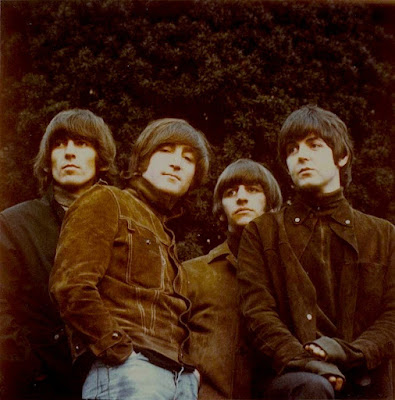 "The uncropped and untilted photo that was used for The Beatles’ RUBBER SOUL (Robert Freeman 1965).RUBBER SOUL might be my favorite Beatles album*. It has an Indian summer mood—the sunny joy of their early work is still there, but shadows of melancholy and introspection have appeared and are growing longer. The instruments sound clear, as if they are being played in an open field, McCartney’s soulful fuzz bass is like a hummingbird buzzing around your head. And the grass… well, the grass is there to be smoked."

I alternate as I have said before between Sgt Pepper, Revolver and Abbey Road as to an actually favourite Beatles album depending upon my mood but Rubber Soul was a benchmark in the exotic, the strangeness of British pop and the emergence of the true creative writing style and growing adult sophistication of these guys and I KNEW something was happening