1963 - The Beatles
The Beatles second album 'With The Beatles' started a 21-week run at No.1 on the UK album chart. It replaced their first album 'Please Please Me' which had been at the top of the charts since it's release 30 weeks previously. Also today, all four Beatles appeared on BBC TV's 'Juke Box Jury'. Some of the songs The Beatles judged were ‘Kiss Me Quick’ by Elvis Presley, ‘The Hippy Hippy Shake’ by the Swinging Blue Jeans. ‘Did You Have a Happy Birthday’ by Paul Anka and ‘Where Have You Been All My Life’ by Gene Vincent.

1964 - Brian Wilson
Beach Boy Brian Wilson married Marilyn Rovell in L.A. The couple divorced in 1979. Marilyn and her sister and cousin were in a group, the Honeys, who were produced by Brian Wilson. Marilyn and Brian had two daughters, Carnie and Wendy, who became members of Wilson Phillips.

1967 - Otis Redding
Otis Redding went into the studio to record '(Sittin' On) The Dock Of The Bay'. The song went on to be his biggest hit. Redding didn't see its release; he was killed three days later in a plane crash. Redding wrote the first verse of the song, under the abbreviated title 'Dock of the Bay', on a houseboat at Waldo Point in Sausalito, California a short time after his appearance at The Monterey pop festival. Redding's familiar whistling, heard before the song's fade was the singer fooling around, he had intended to return to the studio at a later date to add words in place of the whistling. I don't think IO knew anyone who didn't own this and it tore our hearts to hear of Otis' death . . . . . .

1967 - The Beatles
The Beatles Apple boutique on 94 Baker Street, London, opened its doors. The store closed seven months later when it fell foul of council objections over the psychedelic mural painted on the outside. All the goods from the shop were given away free to passers by and to people who had queued throughout the night for a chance of getting a free item.
1968 - The Beatles
The Beatles White Album started a seven-week run at No.1 on the UK chart. The double set was the first on the Apple label and featured 'Back In The USSR', 'Dear Prudence', and the Harrison song 'While My Guitar Gently Weeps.' with its cover designed by father of 'Pop' art Richard Hamilton [who I have discussed in detail earlier here] photos and poster and minimalist cover 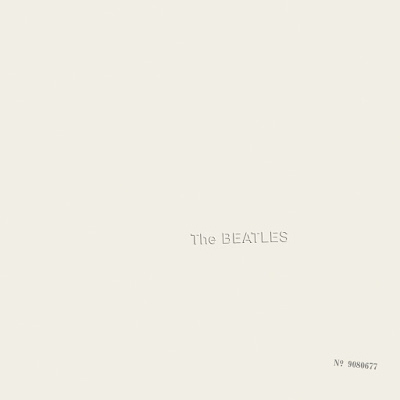 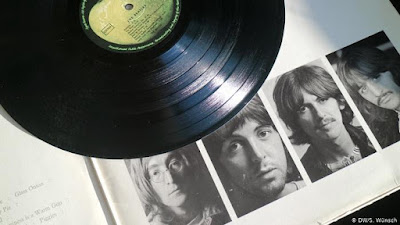 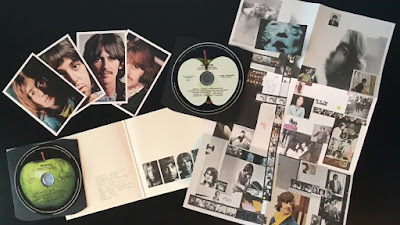 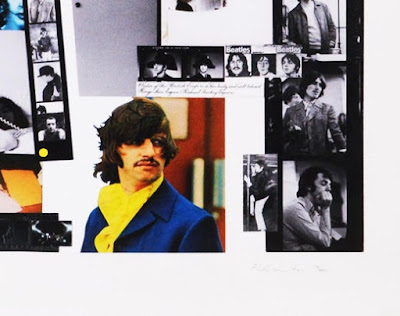 1974 - Barry White
Barry White was at No.1 on the UK singles chart with 'You're The First, The Last, My Everything', the singers first UK No.1. Originally written in the 1950s as a country song with the title 'You're My First, You're My Last, My In-Between.'

1974 - Carl Douglas
Carl Douglas started a two week run at No.1 on the US singles chart with 'Kung Fu Fighting'. The song was recorded in 10 minutes, had started out as a B-side and went on to sell over 10 million.This bloody thing drove us all quite mad via our radios back in the day . . . . . . .ear from bar none! Thanks Carl!


1979 - The Police
The Police had their second UK No.1 single with 'Walking on the Moon', taken from their second album 'Reggatta De Blanc'. The video for the song was filmed at Kennedy Space Center interspersed with NASA footage.

1991 - George Michael
George Michael and Elton John were at No.1 in the UK with a live version of 'Don't Let The Sun Go down On Me', (a hit for Elton in 1974). All proceeds from the hit went to aids charities.

2005 - John Lennon
The MBE medal that John Lennon returned to the Queen was found in a royal vault at St James' Palace. Lennon returned his medal in November, 1969 with a letter accompanying saying, "Your Majesty, I am returning my MBE as a protest against Britain's involvement in the Nigeria-Biafra thing, against our support of America in Vietnam and against Cold Turkey slipping down the charts. With Love, John Lennon." Historians were calling for the medal to be put on public display.


2014 - Pink Floyd
Pink Floyd's classic album, The Dark Side Of The Moon made a surprise return to the Billboard chart when it landed at No.13, thanks to ultra-cheap pricing in the Google Play store where the album was discounted to 99-cents. Although it held the No.1 spot in the US for only a week when released in 1973, it remained in the Billboard album chart for 741 weeks. 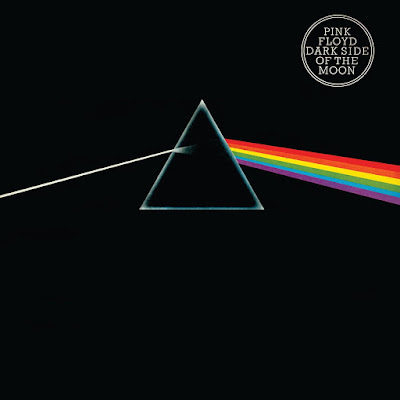 2015 - David Bowie
David Bowie made his last public appearance when he attended the opening night of the Lazarus production at the New York Theatre Workshop in Manhattan. Tickets to the entire run of the musical (which ran until 20th Jan 2016), sold out within hours of being made available. 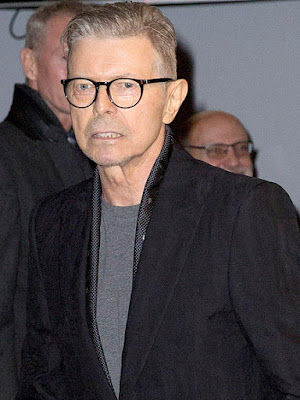 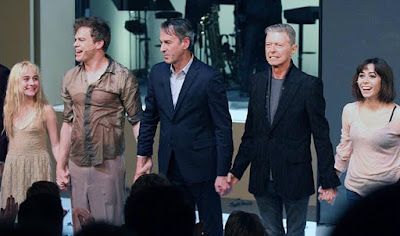 2016 - Greg Lake
Greg Lake, who fronted both King Crimson and Emerson, Lake and Palmer, died aged 69 after a battle with cancer. One of the founding fathers of progressive rock, the band combined heavy rock riffs with a classical influence. They scored hit albums with Pictures at an Exhibition, Trilogy and Brain Salad Surgery and Lake had his solo hit 'I Believe in Father Christmas'. Jimi Hendrix considered joining ELP in their earliest incarnation, and if this had happened, the band would've been known as HELP.

Winston Marshall, banjoist in the Grammy Award winning British folk rock band Mumford & Sons. Their second studio album 'Babel' released in 2012 debuted at No.1 on both the UK Albums Chart and the US Billboard 200. It became the fastest selling album of 2012 in the UK. The live performance at the 2011 Grammy ceremony with Bob Dylan and The Avett Brothers led to a surge in popularity for the band in the US. The band received eight total Grammy nominations for Babel and won the Grammy Award for Album of the Year. Nicole Appleton, singer from British girl group All Saints, who had the 1998 UK No.1 and US No.4 single 'Never Ever'. The group's debut album, All Saints (1997), went on to become the third best-selling girl group album of all time in the UK. 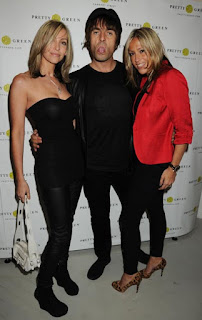 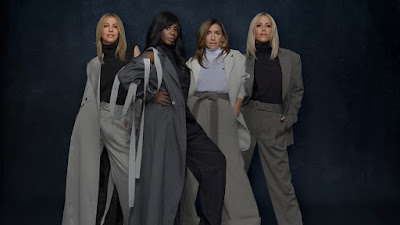 1963 - Huw Chadbourne
Huw Chadbourne, keyboards, from British indie band Babybird, who had the 996 UK No.3 single ‘You’re Gorgeous’, and the 1996 UK No. 9 album Ugly Beautiful. It's funny (as in peculiar) but I was thinking about this single the other day. I thought I heard the introductory phrase on guitar used in a thriller on the Television and meant to seek it out again to see if it was indeed a lift from this classic one hit wonder. I bought 'You're Gorgeous' when it came out and we have said before but this gives me excuse to play it again

Waits: "That’s what Robert Johnson’s father said about Robert, because he ran away. He said, ‘Trouble with Robert is he wouldn’t get behind the mule in the morning and plow,’ because that was the life that was there for him. To be a sharecropper. But he ran off to Maxwell Street, and all over Texas. He wasn’t going to stick around."

Tom Waits, American singer-songwriter, composer, and actor. His songs are best-known through cover versions by other artists: 'Jersey Girl', performed by Bruce Springsteen, 'Ol' '55', by the Eagles and 'Downtown Train', by Rod Stewart.
The master storyteller of the darer side of Americana Tom Waits since ''Closing Time' debuted he has conjured up a career at once uncompromising, distinctive and quite quite unique. Like a popular Beefheart growling and grunting songs that bely their strangeness to appeal to a much broader range of folk than might at first have ever been imagined. Outstanding stellar points for me were from Swordfishtrombones, Rain Dogs, Franks Wild Years to Mule Varations and the follow up releases Alice and Real Gone not to mention a personal favourite film soundtrack 'One From The Heart' with Crystal Gayle

with thanks to On This Day in Music
Posted by Andy Swapp at 3:52 pm