I loved this film of Roy and all the stars who appreciated him. What a line up and what a towering tribute to a wonderful songsmith. Allegedly Elvis Presley's favourite singer it is easy to see why and still so here . . . . . .
Buy the whole thing if it's still available . . . . . hang on I'll go check . . . .


On this day in music history: September 30, 1987 - The television special “Roy Orbison and Friends, A Black and White Night” is filmed. Shot on 35mm black & white film, the concert is filmed in the Coconut Grove Nightclub of the Ambassador Hotel in Los Angeles, CA. The concert stars the rock & roll hall of famer with numerous musician friends and admirers including Bruce Springsteen, Elvis Costello, Jackson Browne, J.D. Souther, Tom Waits, k.d. lang, Bonnie Raitt, and Jennifer Warnes. The show is put together by producer and musical director T-Bone Burnett leading a backing band that includes keyboardist Glen D. Hardin, bassist Jerry Scheff and guitarist James Burton. The special is first broadcast on Cinemax on January 3, 1988. The special is also released on home video and as an album after Orbison’s death. He also wins a Grammy Award posthumously for Best Male Pop Vocal Performance for the live recording of “Oh, Pretty Woman” in 1991. 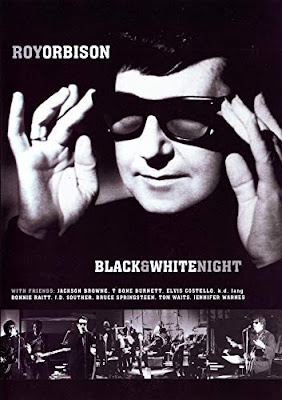 thanks to Jeff Harris' Blog Behind the Grooves
Posted by Andy Swapp at 11:03 am