Terrible news just coming in of a further Earthquake today of 7.3 - Reuters reporting 29 dead (increasing numbers doubled as I write) and hundreds injured, tremors felt in India, Dhakar Bangladesh and Tibet
http://www.reuters.com/article/2015/05/12/us-quake-nepal-idUSKBN0NX0JO20150512
One can't help but wonder at the terror and trials the Nepalese people face. When I was feeling sorry for myself and somewhat depressed at the election news. Bemoaning the outcome of a mere quarter of the British voting population putting a Conservative government in place over the majority of us again we can but reflect that at least we are safe from such terrible natural disasters
Posted by Andy Swapp at 12:20 pm No comments:

BBC and The Politicians! 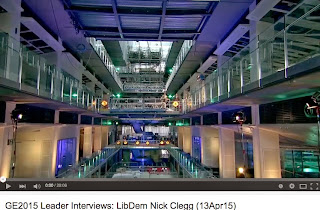 The interviews on the BBC with the heads of the political parties as quizzed by Evan Davis have been shallow, one dimensional, and Davis largely irritating and rude. I felt when he took over the Newsnight chalice that I should like Davis but comments on his sudden emergence on the Beeb's 'entertainment' rosta should have forewarned me perhaps, like his Newsnight predecessor quiz show host Jeremy Paxman, Davis has come from second rate TV entertainment (the truly dreadful Dragons Den!) 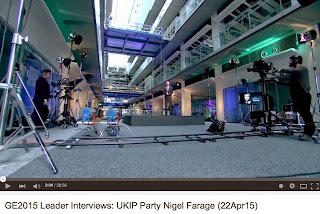 These scheduled interviews with the party political heads the BBC decided to shoot in what looks like a foyer or a mezzanine landing by the toilets near the coffee machine. Ever reminiscent of the comedy John Morton's hilarious 'W1A' and one wonders if they couldn't use the 'Frankie Howerd' room or or show up in Anna Rampton's 'Head of BBC Better' offices!? That they have shot in the 'no nonsense' landing seems to suggest a practical 'truth saying' all nuts and no bolts but this could not be farther from that. It is still an interview 'set' with blue background for the PM, red for Ed, a strangely pink hue to the underlay carpet floor for the SNP leader Nicola Sturgeon whilst Nigel Farage seems set against a cross between red and blue (subtle that!) so the purple reflects the prose of the interview which was amongst the most crass of the lot. 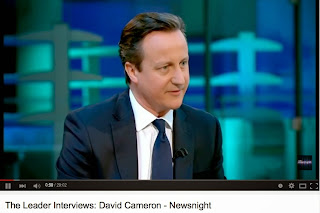 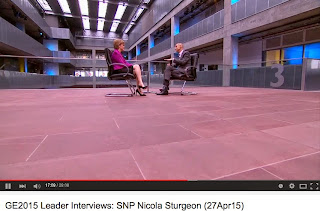 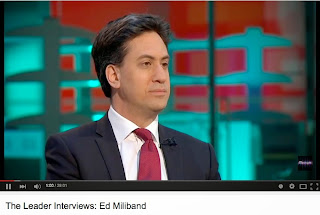 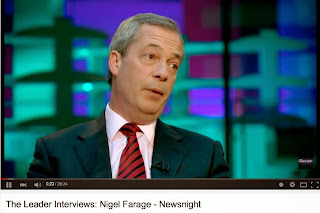 Davis seems to have a shockingly poor budget, 'shoes like dead pigs noses' to paraphrase Ian Dury, seemingly the same ones each time and a crumpled and shabbily pressed cheap suit, the turn ups noticeably poorly hung and sewn badly and look for all that wardrobe must have had to take them up in a hurry, he generally looks like he could do with either a good wash or a good nights sleep and preferably both! 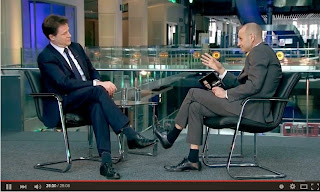 An earlier performance with Nick Clegg had him showing off short socks and an embarrassingly pallid expanse of skinny white leg. The treatment of Nigel Farage was little short of facile, rude and crass and fortunately analysed much better elsewhere but it shocked me. If Davis wrote the questions he should be ashamed of himself. I expected better though I am beginning to wonder why. 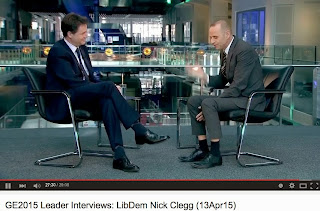 The BBC or Davis himself clearly thinks it is the school of tenacious interviewing that thinks it merely gritty to interrupt, raise your voice, bluster, hector, and most irritatingly, talk across people incessantly and show scant regard for eye contact and the most revealing camera shots show Evans looking at his notes (flash card idiot boards?) rather than any active listening to the replies given by the MPs involved. 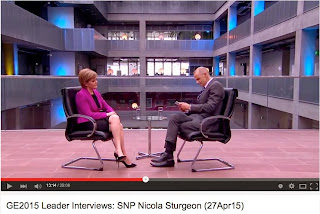 Rude and ignorant he started the interrogation of SNP leader Nicola Sturgeon, by asking if "When she was in Scotland she would ask people to vote SNP and in England to vote Labour, how does she equate this inconsistency?" which frankly is a question a school pupil of scarcely double figures could work out why it is clearly no such thing. At that point I would have walked out until they got an adult to talk to me! 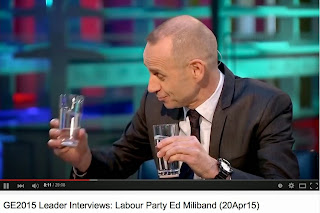 Let's have Kirsty Wark, Stephen Sackur or someone with at least some gravitas a la David Dimbleby whom it is presumabley beneath by now and at least someone with some clout who doesn't have to resport to shouting across folk and some basic interview technique or even a vague empathy with their subject!
Coming close to the end with Sturgeon he wondered out loud 'Are you the most powerful woman in the UK?' This it seemed to me is the question of a primary school sandpit! 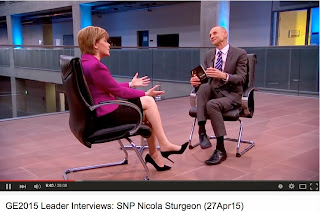 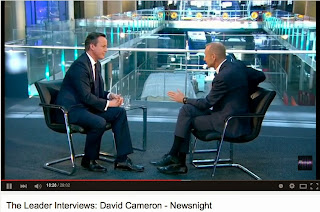