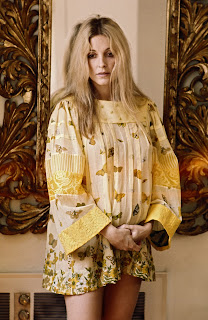 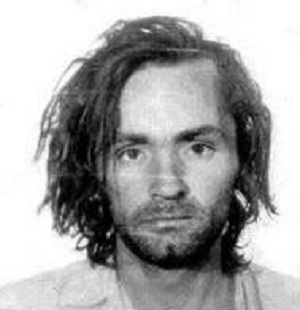 I had been looking forward, if that’s the right term, to seeing a new programme about Charles Manson and the Manson Family advertised on the Really TV channel that boasted the last interview with it’s subject. Filmmaker Buddy Day received a phone call from Manson himself after years of corresponding with the then inmate of California State Prison. It was the first of many calls and it became the basis for the new special ‘Charles Manson: The Final Words’. ‘The true story has never been told . . . . . until today’ - Rob Zombie the narrator – this is palpable nonsense and what we have is a loose assembly of taped phone calls and the cursory theorising of yet another film made with no new information whatsoever.

I had lived through the times of 1969’s disastrous chaos of the Manson Family murders (I was 16) and it was amongst several events that took the Hippie ideal I held so dear stomped all over it, frightened so many of us, and trashed it permanently so none of us would quite be the same again.  To say the senseless crime reverberated across the world is an understatement. The magnitude of the callous violence shocked me and does still. The complete lack of any moral compass. The randomness of petty motives from chance encounters to perceived slights and disrespect as motive shocked more than any acid fuelled reasoning, Race–war Helter Skelter shtick. We KNEW this was acid days madness.  The inhabitants of Cielo Drive weren’t the “Establishment” this was no revolutionary act. The LaBiancas were not getting any just deserts after some ‘pig’ type association with ‘The Man’. Merely middle class comfortably off owners of a super-market. Drug deals gone wrong in other instances and mostly just people being in the wrong place at the wrong time. This was Charlie’s madness and he pulled the strings of his puppets with drug induced psychoses that he learned to command. It contributed greatly to my disillusionment with many of my worldview ideals born of all that was good about the hippy movement. From Altamont, the deaths of Janis Joplin, Jim Morrison and Jimi Hendrix, Kent State shoottings of students to the slaughter of pregnant actress Sharon Tate and her friends . Shock of the counter culture’s demise took on new levels of despair and horror. 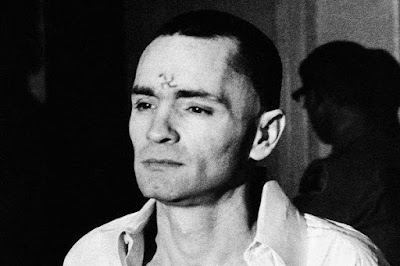 I read two main books on the subject in Vincent Bugliosi’s prosecuting lawyer’s account of the events in his ‘Helter Skelter’ to Ed Sanders (of The Fugs fame) more studious less sensationalist account in his ‘The Family: The Story of Charles Manson's Dune Buggy Attack Battalion”. Lurid though the title may be the research Sanders put in alone makes it the only necessary reading for me. The Bugliosi book is a shock in that people didn’t then expect lawyers to so blatantly make a fast buck off the misery of such sordid brutal crimes. Nowadays it is almost compulsory!

·       'I never ordered nobody to do anything.’ Charles Manson
[you understand what a double negative means? This is how Manson gets away with telling the truth whilst appearing to plead innocence]

The problem with this new programme is that Manson makes for a tiresome interviewee. The interviews take place over the telephone which adds to the distinct lack of connection and he could only call in fifteen minute chunks but Manson sounds medicated throughout and it made me wonder if the inmates, like him especially, were on Benzos or major trancs as he sounds drunk or slurred with Valium type meds. Ever the drug dealer, Manson was charged with additional crimes whilst incarcerated that included selling dope so it didn’t seem an issue to get drugs and of course the authorities have a vested interest in their inmates being malleable and soporific. The additional problem is that he is barely lucid at the best of times and many of the additional interviewees are scarcely more literate themselves except the lawyers of course.  This included ‘music producer’ Phil Kaufman, ex-Family members Barbara Hoyt and Catherine “Cappi” Gillies along with prosecutor Stephen Kay, defence attorney Gary Fleischman and Bobby Beausoleil.

The programme purports to discuss two separate and conflicting theories as to the motives and whilst ‘Helter Skelter’ with it’s Race War delusions may have served to put the perpetrators away more quickly as is suggested the so called alternative is barely more lucid and the fact remains any motive is severely affected by drugs and major league consumption of hallucinogenics, the drugs of choice among family members along side the ubiquitous marijuana. Both theories hardly conflict and in fact could be summaries of two attitudes toward the same events. These go to ‘motive’ the FACTS are hardly in dispute. Manson even seems to add or admit to them over the coming years and indeed whilst at court. 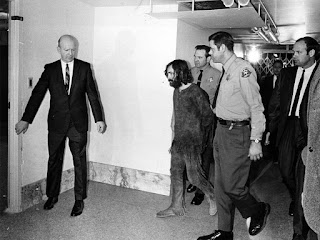 These theories show little that is ‘new’ and are riddled with holes and loopholes so as to be largely irrelevant. The murders and what actually happened in terms of the truth is well documented not least by Sanders and Bugliosi and indeed during the court case. Everything else was bickering about what did and did not constitute conspiracy. That they all committed conspiracy to commit murder seems largely indisputable. The ‘spin’ of the programme is solely the words of Manson himself. Incoherent, telephone ramblings of a madman? Certainly. Of further interest to the true crime aficionado? Not really.

·     “Why I could have killed hundreds of people” Charles Manson
Manson’s main statements are that society gave up its children to him  (many of the ‘girls’ were literally that and Charlie didn’t seem to have any restraint when choosing partners whether someone was 13-14) the unwanted disaffected and the runaway came to the Spahn Ranch looking for like minds, a ‘groovy scene’ and found, in plain words, evil. Charlie as the new messiah he himself believed himself the second coming of Christ but most soon realised they were dealing with the Devil incarnate. 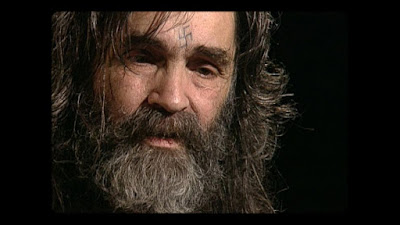 To a large degree Charles Manson is right, he was a productive of society! If this seems in retrospect startling I take it that the ‘hippie’ notions of the sixties he spouted are largely truisms, cliché, platitudes and quasi-mystical quasi-religious bullshit and many found to be about social conditioning and behaviour but in Manson’s case he is also culpable in everything he did, everything he ever said and the criminal acts he perpetrated from his youth onward. We all have choices in this world and whether we turn out wrong or good is largely down to us. That he was the product of a hugely dysfunctional childhood is a given and any child abused and neglected has a degree of my sympathy. Not all of people who had far worse done to them as children turned into psychopathic killers. I have been privileged to work with a number and they did not commit anything like the acts laid at Manson’s feet. 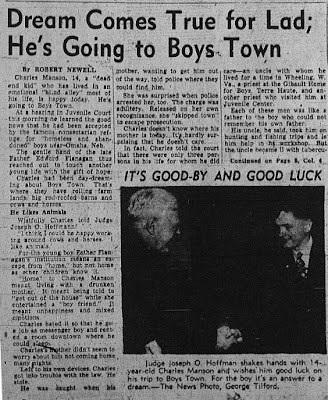 ·       I'm probably one of the most dangerous men in the world if I want to be. But I never wanted to be anything but me. Charles Manson 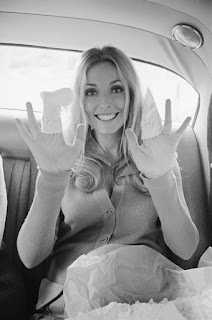 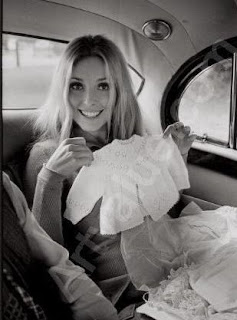 I always go first to the victims of the ‘Family’ murders. Sharon Tate always first for me as she was murdered whilst eight and a half months pregnant. The murder of an unborn child will and I believe should always be taken into consideration above all others. Atkins is alleged to have said to Tate pleading for her life and the unborn child she bore ‘Look, bitch, I have no mercy for you. You're going to die, and you'd better get used to it.!’. The other victims in the Tate/LaBianca murders are innocent citizens in the wrong place at the wrong time. They are no more the ‘establishment’ that Manson’s beloved Beatles. The Tate household was anything but. The LaBianca household merely business people. Hinman a drug involvement gone wrong.  Steve Parent totally just a youngster in the wrong place.  Shot dead on a whim. Ronald Hughes a defendinglawyer who sought to challenge Charlie. Not a good idea. All were really bumped into by Manson at once stage or another and fitted his skewed and paranoid delusions. This was no radical Black Panther, Angry Brigade, Baader-Meinhof type radical anarchic political statement. All active around the same time. This was random perverse slaughter of innocents. Killing for pleasure.

Manson communicated with a drug fuelled patois, gibberish, patter, routines of the street, a snake oil salesmen, using non sequiturs and similar word play familiar to drug dealers and crims. It should be remembered he learned much about Scientology (the classic brainwashing belief system, Manson owned an E-meter the behavioural conditioning device to learn control over feeling anything) and always stated Scientology as his faith in any paperwork. His involvement with the theories of The Process meant a little knowledge is a truly dangerous thing! Manson relied on his street smarts to get by and on occasion tied himself verbally up in knots, no intellectual he, desperately trying to shake off responsibility like the coward he was and yet so narcissistic in his malfunction he wanted to take responsibility as ‘leader’ for the crimes. The ‘family’ brainwashing is a truism of the illiterate, the damaged and the drug fuelled drifters, malcontents and the unwanted and forgotten, he assembled by some perverse osmosis, spider to the fly routines, and the wandering ‘hippies’ so called (though they were hardly that) gathered on the principles that flies gather around the rotten refuse of society. 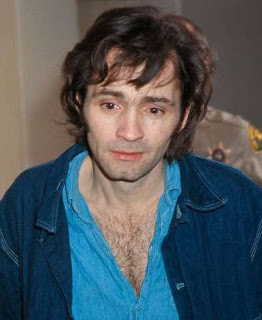 Manson was barely literate and repeatedly stated so using it as a badge to avoid understanding and reading parole paperwork and legalese most of the time.
Ultimately this programme was as unsatisfying as it gets and has little purpose. The theorising is amateur to say the least and really the lead episode of this new series on serial killers adds little to the burgeoning piles of sensationalist drivel. The filmmaker tentatively explores two theories, which if anything are complimentary rather than conflicting. If the prosecution were guilty of anything it was realising what they were truly faced with and expediting the murderers sentencing to save on public money. Society dishing out its just deserts.

How this dysfunctional psychopath can still have followers and acolytes is beyond me but that his story attracts the disaffected still is testament to the depths of depravity and stupidity that some people are prepared to sink to. For me this programme adds nothing to the legend or the serious aspects of the case that hasn’t already been well covered by Ed Sanders at the time. Interview the man himself. Pointless and buys into to his overweening narcissistic personality disorder, psychotic delusional egotism and pampers him, lionises him, another hagiographic waste of time

·       Believe me, if I started murdering people, there'd be none of you left.Charles Manson

Manson stands as nothing greater than a dime-a-dozen brain fried acidhead, a psychopathic product of an abusive dysfunctional upbringing for sure and the prison system too, petty criminal conman turned murderer, no talent, third-rate drug dealer, no mark irrelevant, recidivist. Dead now and merely a footnote in the cultural explosion of the sixties that spawned so many truly loving caring insightful extraordinary creative people.
Manson is not among them. 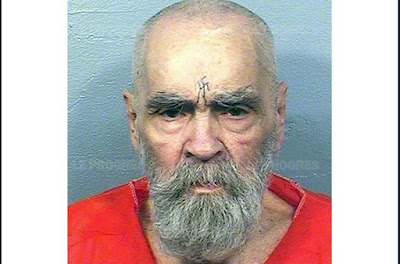 "There is no end to my insanity" Charles Manson
. . . . . .and fortunately there was

Bernard ‘Lottsapopa’ Crowe? (Shot by Manson but survived though Manson thought he had died)