Vincent van Gogh didn’t start painting properly until he was 27 but his oeuvre included nearly 900 finished works — an average of about 2 per week — that's not including drawings of which there are many many more. One of the most astonishing facts is that when he was working in the Borinage peat cutting district of Belgium and drawing pretty much every day he left behind so many drawings (see remainder in the Catalogue Raisonne) the family he lodged with in their outhouse were able to burn the drawings to keep warm for some considerable time . . . . . . it is also estimated that he must have been drawing or painting every day before he died at 37

"I would like to leave this world and never return. I severed my ear, but how I wish that I had severed my heart. I shall never amount to anything." — Vincent van Gogh 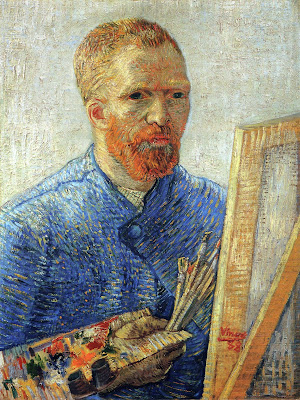 For my part I know nothing with any certainty, but the sight of the stars makes me dream

On this day in music history: July 29, 1967 - “Light My Fire” by The Doors hits #1 on the Billboard Hot 100 for 3 weeks. Written by Robby Krieger, John Densmore, Ray Manzarek and Jim Morrison, it is the biggest hit for the L.A. based rock band. Composed mainly by guitarist Robby Krieger, it is credited to the entire band when he brings the unfinished song into the studio (in August of 1966 at Sunset Sound Recorders in Hollywood, CA), for the other band members to expand upon. The nearly seven minute long track is edited down to under three minutes for single release when it receives heavy airplay as an LP cut. The edited mono single version also presents the song at its originally recorded speed. The more commonly heard stereo LP version was mixed at a slightly slower speed due to an error made during the mixing process. Released as the second single from the bands self-titled debut album in May of 1967, it quickly becomes a radio staple. Entering the Hot 100 at #93 on June 3, 1967, it reaches the top of the chart eight weeks later. Shortly after The Doors top the chart, they are invited to perform their number one hit on The Ed Sullivan Show on September 17, 1967. The censors at CBS ask the band to change the lyric “girl we couldn’t get much higher”, to “girl, we couldn’t get much better”, feeling that the original lyric is a drug reference. Jim Morrison initially agrees, then sings the original line anyway during the live broadcast. The move infuriates host Ed Sullivan, leading him to permanently banning The Doors from the top rated variety show. Only a year after the original version “Light My Fire” tops the chart, it becomes a major hit again, when it is covered by musician Jose Feliciano. His version peaks at #3 on the Hot 100 in August of 1968. The song is recorded numerous times over the years by several artists including Shirley Bassey, The Four Tops, Johnny Mathis, Nancy Sinatra, Stanley Turrentine, Al Green, Minnie Riperton, and Amii Stewart to name a few. The jazz/R&B duo Young-Holt Unlimited (“Soulful Strut”) record an instrumental version in 1969, which is widely sampled in later years, most notably as the basis of Above The Law’s hit “Untouchable” in 1990. “Light My Fire” is certified Gold in the US by the RIAA, and is inducted into the Grammy Hall Of Fame in 1998.
Posted by Andy Swapp at 12:55 pm No comments:

BEFORE THE FLOOD COMPLETE

BEFORE THE FLOOD COMPLETED - Midnight Cafe 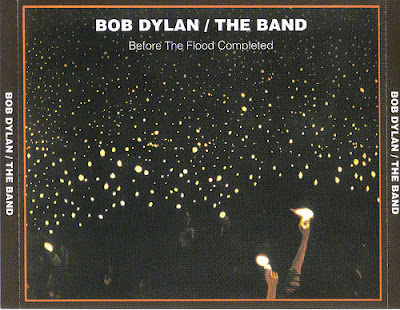 I bought 'Before the Flood' when it came out in the UK and had first heard it round a house near where I live now where a few real 'heads' lived and they were playing it really LOUD. It captured something in me that day and has stayed a favourite album both a favourite Bod Dylan album,  a favourite Band also and perhaps one of my top favourite live albums of all time. 'Most Likely You Go Your Way (and I'll Go Mine)' is one of my favourite live [& angry] songs of all time. Knowing that they had recorded quite a stack of material made it all the more tantalising over the years since and many different bootlegs surfaced both this version from the wonderful Midnight Cafe blog is about the best I have ever heard. So thinks for this Mat over that at the cafe and for the rest of you download this now! Supreme artwork, great notes and a crisp recording and one for the archives and no mistake

Posted by Andy Swapp at 3:35 pm No comments: 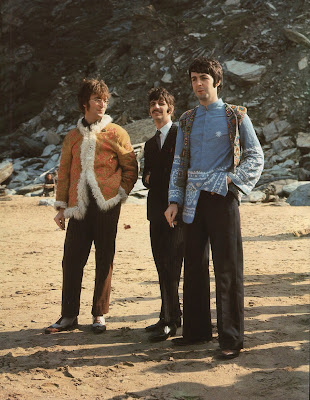 Since the rise of The Beatles, John has gained the image of the vicious, outspoken Beatle. How did he like it? “It’s been very useful,” he replied. “A lot of slimy reporter types seem to have got to fear me, it’s fantastic. I didn’t work for the title of the vicious Beatle, the biting Beatle, the one with the rapier wit. It’s a load of crap. It’s handy being tagged like this. When I meet intelligent and hip people, I have to be on my toes not to disillusion them. The people who have fallen for my image and publicity go to Paul, which I think’s funnier still.
“Paul can be very cynical and much more biting than me when he’s driven to it. ’Course, he’s got more patience. But he can carve people up in no time at all, when he’s pushed. He hits the nail right on the head and doesn’t beat around the bush, does Paul.”
JOHN LENNON, INTERVIEW W/ RAY COLEMAN FOR MELODY MAKER. (APRIL 10TH, 1965) 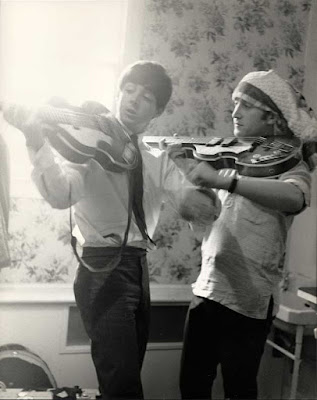 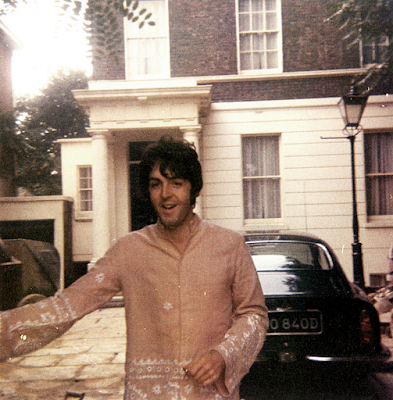 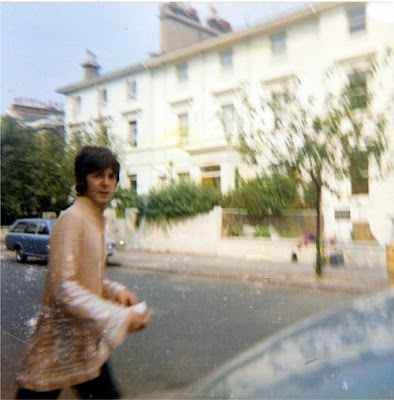 Posted by Andy Swapp at 3:02 pm No comments:

Posted by Andy Swapp at 2:45 pm No comments: 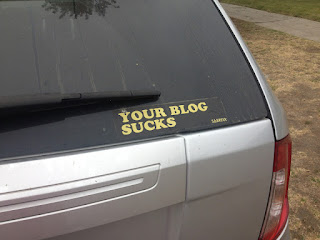 Posted by Andy Swapp at 6:02 pm No comments:

Your Favourite Band is Killing Me!

One of Amazon's Best Books of 2016 So Far Music critic Steven Hyden explores nineteen music rivalries and what they say about life Beatles vs. Stones. Biggie vs. Tupac. Kanye vs. Taylor. Who do you choose? And what does that say about you? Actually--what do these endlessly argued-about pop music rivalries say about "us"? Music opinions bring out passionate debate in people, and Steven Hyden knows that firsthand. Each chapter in YOUR FAVORITE BAND IS KILLING ME focuses on a pop music rivalry, from the classic to the very recent, and draws connections to the larger forces surrounding the pairing. Through Hendrix vs. Clapton, Hyden explores burning out and fading away, while his take on Miley vs. Sinead gives readers a glimpse into the perennial battle between old and young. Funny and accessible, Hyden's writing combines cultural criticism, personal anecdotes, and music history--and just may prompt you to give your least favorite band another chance.

Labels: Steven Hyden, Your Favourite Band is Killing Me 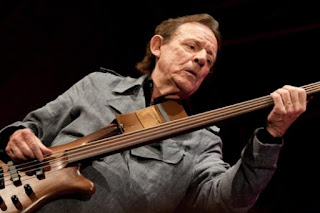 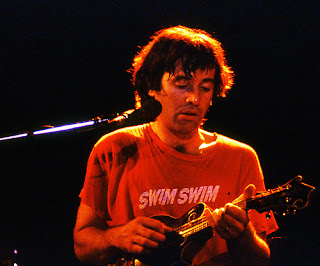 Can't think of any better way to cheer ourselves as the flood of terrible news continues but with some fine fine Ry Cooder from way back at Cotati, I posted and enjoyed a set from the Chicken Skin Review in 87 but here he is again with Van Dyke Parks and the guys fonking it up! From the legendary Floppy Boot Stomp blog . . . . . .

Posted by Andy Swapp at 3:58 pm No comments:

This had been preying on my mind . . . I couldn't recall where it was from but the sentiment summarised what I had been thinking about Vincent Van Gogh . . . . .

"To me Van Gogh is the finest painter of them all. Certainly the most popular great painter of all time. The most beloved. His command of colour. . . the most magnificent. He transformed the pain of his tormented life into ecstatic beauty. Pain is easy to portray but to use your passion and pain to portray the ecstasy and joy and magnificence of our world . . .  No-one had ever done it before. Perhaps no-one ever will again. To my mind, that strange, wild man who rammed the fields of Provence . . . was not only the world's greatest artists but also one of the greatest man who ever lived."

Ha ha ha ha . . . does this make it any less true, meaningful or somehow worth less?
No!
It is still true . . . . . go to the Van Gogh Museum in Amsterdam and tell me I am wrong


The notion expressed by Richard Curtis through the delivery by Bill Nighy is almost too painful to seriously contemplate; the pathos of Vincent overhearing an art expert stating the truth that he was destined to never hear nor even glimpse any slight suggestion of that he would become amongst the most beloved of great painters is almost too much to take on board but possesses a kind of natural justice we all wish upon him . . .
Posted by Andy Swapp at 3:29 pm No comments: 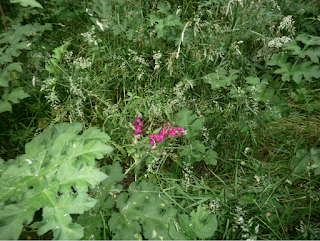 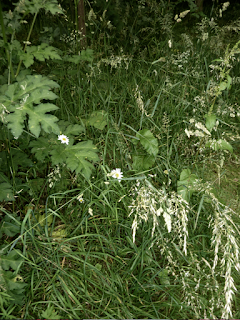 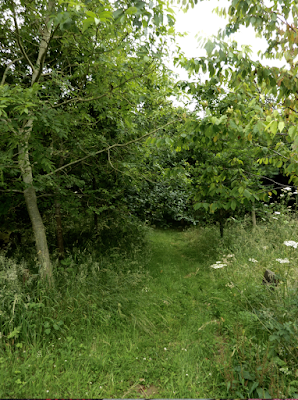 Lovely to visit the burial site of my old friend Stephen Blackman and this year I was taken, if not shocked, by the changes in the site and the weather. It has always been 'dog days' warm and sunny and this day was unusually overcast and yet still warm. The grounds are astonishingly beautiful still but different. They are all much more over grown and this gave me pause. It is what the site is all about I realised there were trees to come either side of Stephen's grave. They are saplings yet but they have really grown tall. Bedecked as it all is with wild flowers and what many of us would call weeds it was amazing. I noticed no butterflies this year and in the past there have been many, Meadow Brown's in abundance and Gatekeepers and Marbled Whites too. This year though a hum with insects no butterflies . . . . . yet.

The seasons may change and yet you still lie at rest there Steve.

Posted by Andy Swapp at 1:43 pm No comments:

and the thing about Glastonbury is that even though I am resigned now to watching it on the tele(after having been to amongst the first ones ever!?! yes! Really) one always manages to discover a new band that we have never heard before and this year is no exception as I found


Nathaniel Rateliff and the Night Sweats

and from over at NPR