Obituary from The Guardian

Director of Who's Afraid of Virginia Woolf?, Catch 22, Carnal Knowledge, The Birdcage (with Robin Williams) my favourite Werewolf film with Jack Nicholson in 'Wolf' …. and of course The Graduate -  several classic and favourite films. He also drected for the stage "Barefoot in the Park," ''The Odd Couple," ''Plaza Suite" and "The Prisoner of Second Avenue" and not forgetting 'Spamalot'! 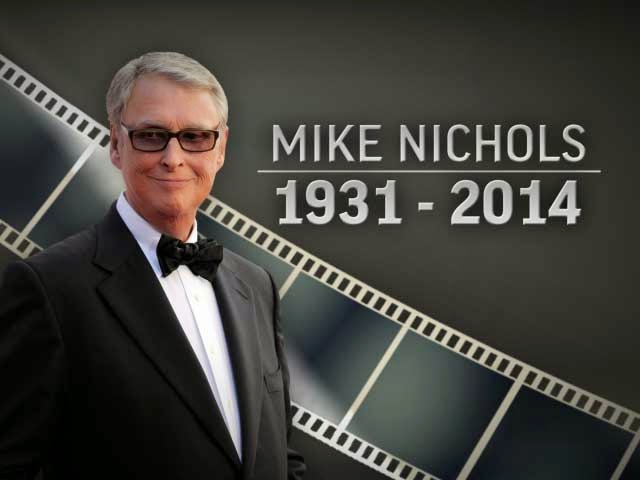 Posted by Andy Swapp at 8:10 pm No comments: 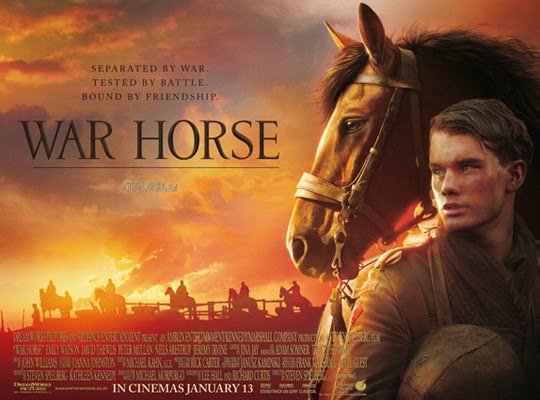 Of course one of the snags of not watching a film when it comes out but waiting for it's release to TV is that one misses the collective hullabaloo and fuss about it's release but this past weekend I watched Warhorse (2011) for the first time and there are a number of things I should add before getting to the grist for this particular mill. I am in awe not to say phobic of horses and I was in awe of my grandfather also, though not phobic about him (!) who was with the RFA in the First World War, a ‘driver’ in fact, so in charge of the horses. It I s this fact that caused me to want to watch it. I am also mindful that the terrestrial TV companies have shown Warhorse in the 100th anniversary year of the Great War, you know the one they called the War to End All Wars, so it is right and proper that due reverence and respect be paid to this context. 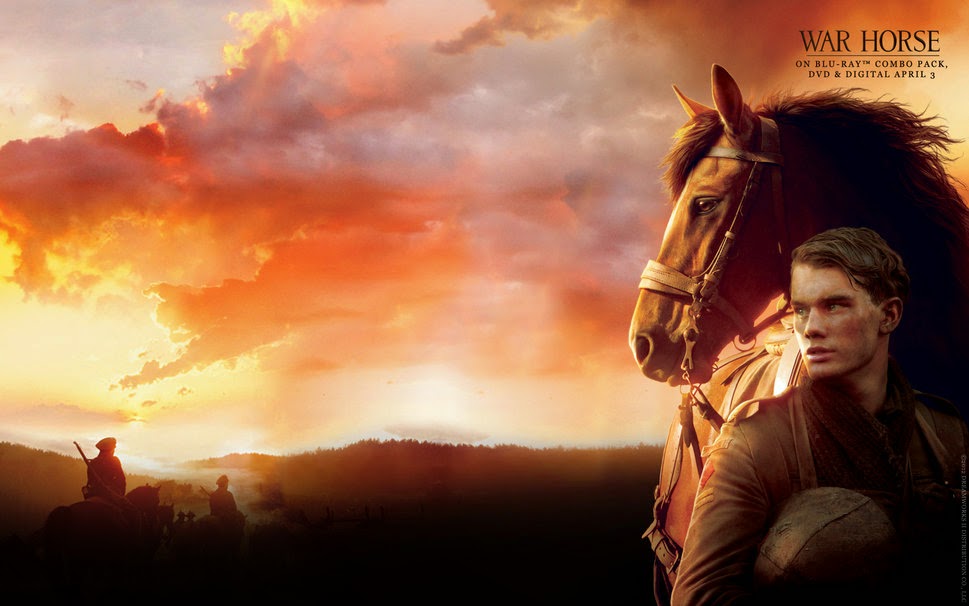 However I cannot tell you quite how terribly disappointed I am in this cloying lachrymose sentimental pile of steaming tosh. It is a disaster of gargantuan proportions to me if only because of its manipulative schmaltz and sickly maudlin clumsiness and I tried to find a review that summarised my feelings to check whether I was so far out of kilter with everyone else especially by finding it quite so old fashioned. The only reviews I found that came close were from the Independent and the Guardian’s P Bradshaw, which is interesting if only because they are the two papers I am most given to read the rest being largely Murdoch, appropriated chip paper. Although I confess also to being somewhat surprised to find Kermode defending it in his DVD round up of the year. I admire him but disappointed to discover we do not always agree. 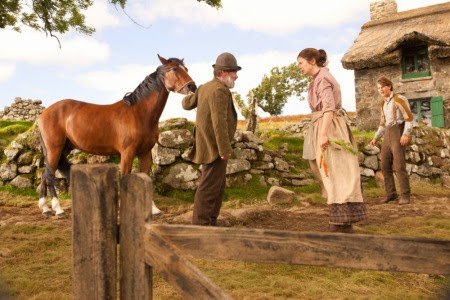 Firstly Spielberg has excelled himself in the vision of the piece and some have called it beautiful but to me it is overblown and Disneyfied to the point of almost seeming ersatz and sickly. I for one found it unnatural to the point of almost extreme surrealism and so fake throughout as to be almost like watching a cartoon. It is as if dipped in honey or butterscotch almost throughout, there seem the no greys or blues but an overriding hue of orange and golden browns the closing scene especially is hilarious if it weren't so clichéd and saccharine sweet. No English landscape ever looked like this, like Gone With The Wind under LSD! 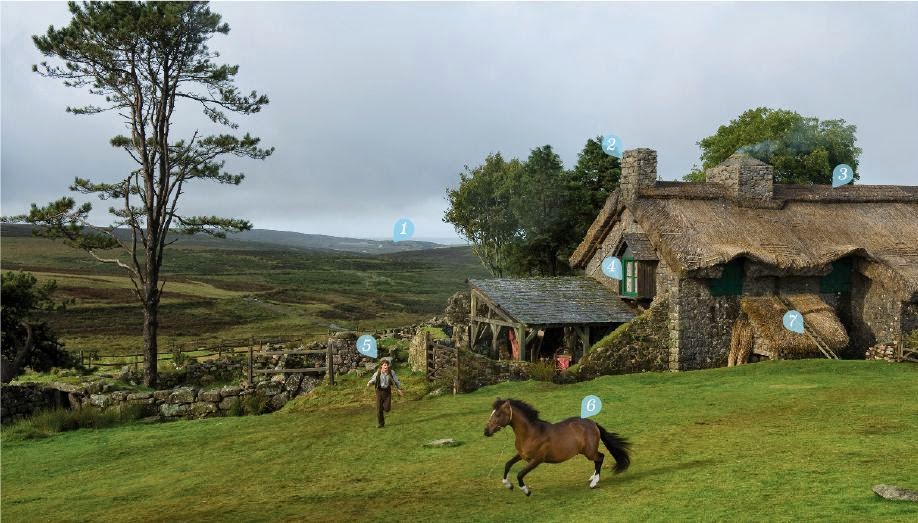 The whole temperature of the film is fake; there is not one single landscape that doesn't strike one as false from the English farm chosen and the ploughing of the unploughable field with the laughable splitting of the rock to the carefully manicured landscapes of France. All strike me as false and fake and Hollywoodised and this takes some doing as they were apparently shot in authentic places. How DOES Spielberg do that? It is as if they have been sanitised and made acceptable to Disney standards. As if they have CGI’d the whole thing but apparently Spielberg in ‘not doing a war film’ apparently, felt especially proud that he hadn’t used ANY!? Some of that guilt must lie with the DoP Janusz Kaminski who claims to be unaware of the ending of Gone With The Wind ad it’s similarities which would worry me were I a producer. How can anyone NOT be aware of the coincidence and what the history of his subject looked like!? There are parallels with many old fashioned films like A Quiet Man for example but to not be aware of one of the all time standard classics stuck me as worrying! 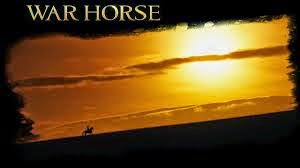 Quite how Spielberg justified his thinking that he has doesn’t think he has made war film is almost beneath contempt if not extremely perverse and disingenuous. It is patently NOT merely a tale of love between a boy and his horse otherwise the points about the machine gun ending the reign of the cavalry and especially the scenes shot in France from the sickly Grandfather and Emilie to the discreet shooting behind the windmill sail of the two under age deserters to the finale with Joey the horse in No-man’s Land. BTW who calls a horse ‘Joey’? That’ s a name perversely chosen to irritate, as everyone knows Budgerigars are called Joey and horses are called Ned (I'm joking here of course but it did strike me as amongst the most anodyne of names to choose for something as butch as a war-horse)
More there is the writing and we have a number on the team but quite why they thought they needed the light comic touch of Richard Curtis amongst others to join forces and make this even more trite and ersatz than it may have been from M Malpurgo's original book for 9 year olds, I won't know now as this film has certainly put me off ever reading it. Not enough jokes about pants, duck faced gals or big titties!? Ironically he worked on Blackadder, which had a far more potent point about the war than any here. There simply are so many lumps and bumps and errors and poorly written parts of this script that I almost do to know where to begin. The whole story is told in clumsy sections and not one cohesive whole but rather several distinct disappointing episodic chunks that clunk and bang against each other so that one could be forgiven for thinking we watched several different films!
The casting if superb features personal heroes like Peter Mullan, Tom Hiddleston, Emily Watson, Benedict Cumberbatch, David Thewlis, and Eddie Marsan and the rest of the company are almost entirely wasted here. Making it even more difficult to watch as so many great talents here are left to flounder. Anther hero actor in Liam Cunningham has a bit part that required such a faux posh accent it is positively hilarious even jarring. I can only assume he was given such little time to develop anything approaching a part that the stiff upper lip accent was left to struggle there. There is no time to build any character or human interaction other than cliché and parody. The drinker/alcoholic father so fat headed he over bids on a thoroughbred horse rather than a plough horse is hilarious were it not so pathetically clichéd and contrived. The stoic little woman begrudgingly putting up with the choices of her men folk is palpably laughable In this day and age for a character of two dimensions. As for accuracy of detail a Frenchman so in love with his now deceased daughter, Emilie, he traverses France to pay £100 for a horse which he then immediately gives away back to it’s owner without accepting the offer of any money in exchange is hilarious and would be funny if it hadn’t been such a saccharine sentimental cliché.
This is Spielberg making a film for Disney with all the worst implications of that unhealthy alliance. Vacuous facile clumsy and trite. This is nowhere near Spielberg’s best. I am thinking ‘Saving Private Ryan’ or even ‘ET’ here. It is patronising to children n in my opinion the very worst of assuming you know what children can and cannot cope with. I do so hope the same is not true of the book. 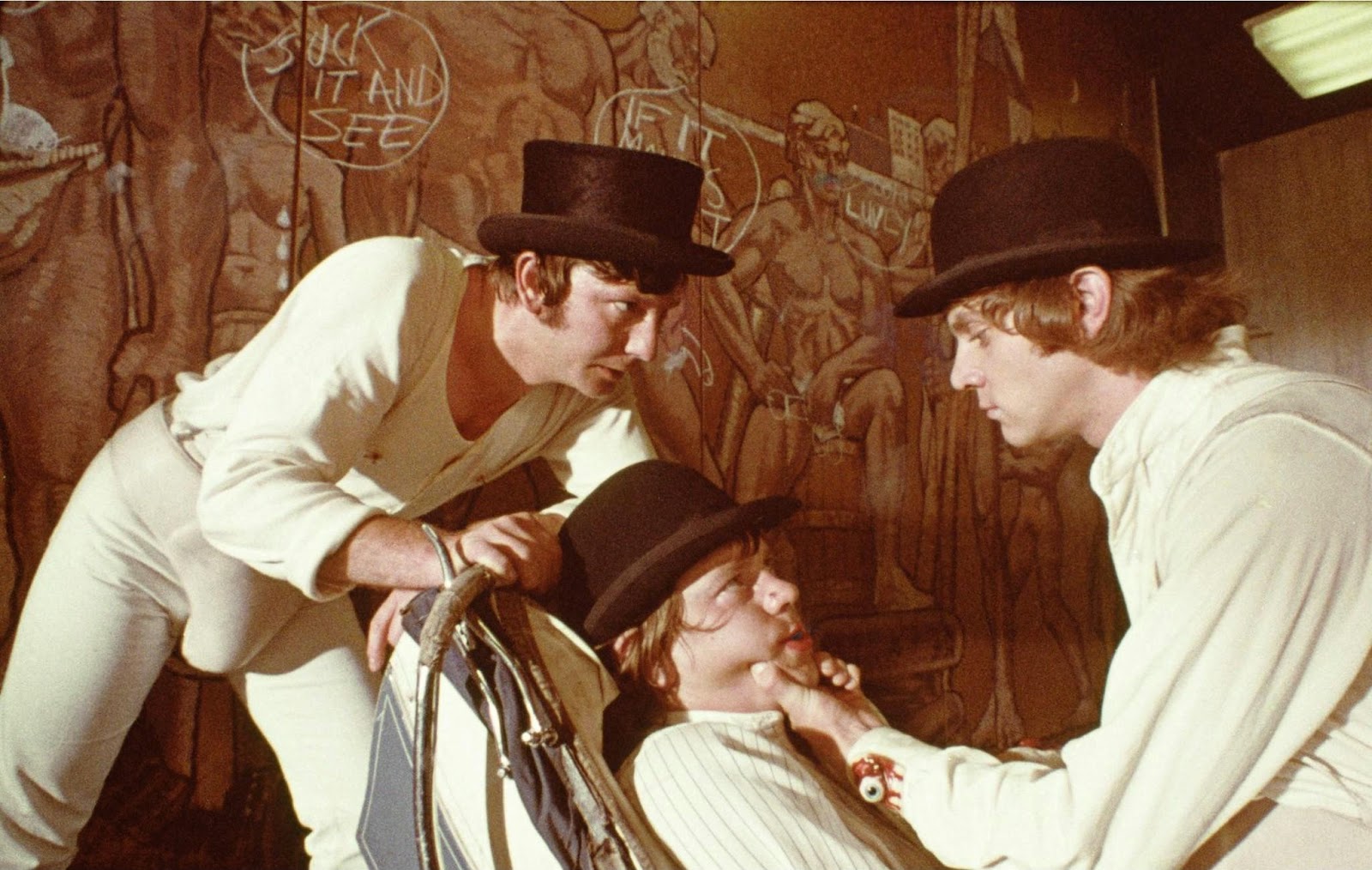 We have lost three actors this week 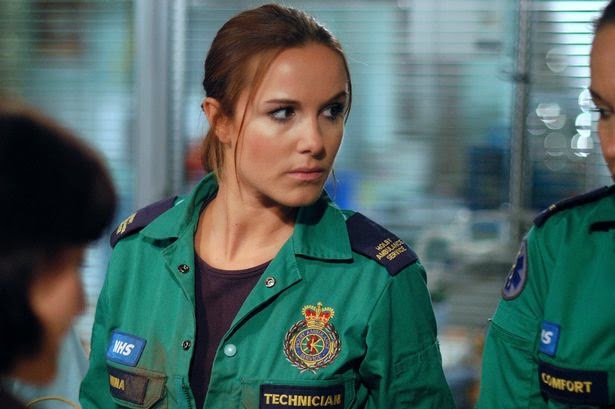 Sad to report, and I know I keep doing this but this week I was especially sad it seemed to me to note the passing of three character actors I admired. Not least Carol Ann Susi the voice actress who played Mrs Wolowitz, Howard's mother in The Big Bang Theory which I adore (since coming off my scooter last year I have probably watched every episode several times!) But I also noticed in the news that day that the glorious Warren Clarke from A Clockwork Orange and Dalziel and Pascoe fame passed away also after a sudden illness. I adored Warren and somehow always remembered the role he played in Clockwork Orange as particularly filled with studied pathos and supremely well acted. I would watch him in anything he did on the strength of that and loved his taciturn Dalziel and Pascoe role. Also sad to hear the lovely actor from Casualty, nurse Nina,  Rebekah Gibbs has died from cancer aged a mere 41. She was lovely and we felt a tremendous spirited actor. Our most sincere thoughts are with the families of these wonderful actors 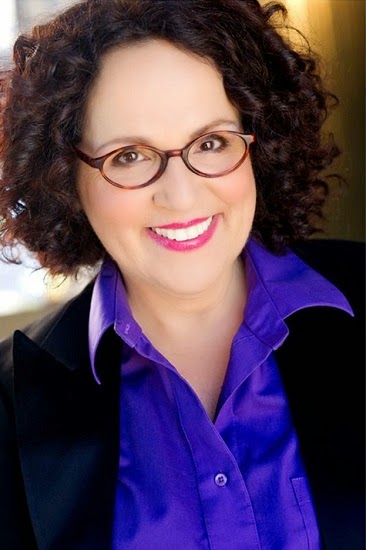 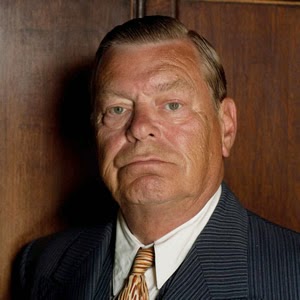 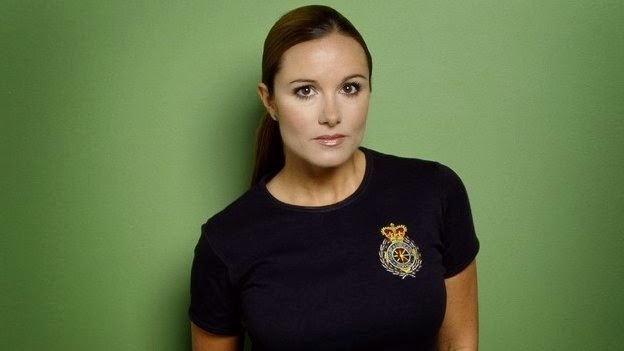 The Untold Story of Bob Dylan's

Forty-six years after Rolling Stone first alerted the world to the existence of Bob Dylan's secret Basement Tapes sessions, the complete recordings are finally getting a commercial release — and we're commemorating the occasion with a cover story. Rolling Stone contributing editor David Browne traces the entire history of the tapes in our new issue (on stands Friday), from the 1966 motorcycle crash that preceded their creation to the secret recording sessions in the Saugerties, New York home known as Big Pink to the many bootlegs and partial releases that have come out over the years to the massive undertaking it took to prepare all 130 tracks for release on The Basement Tapes Complete box set. 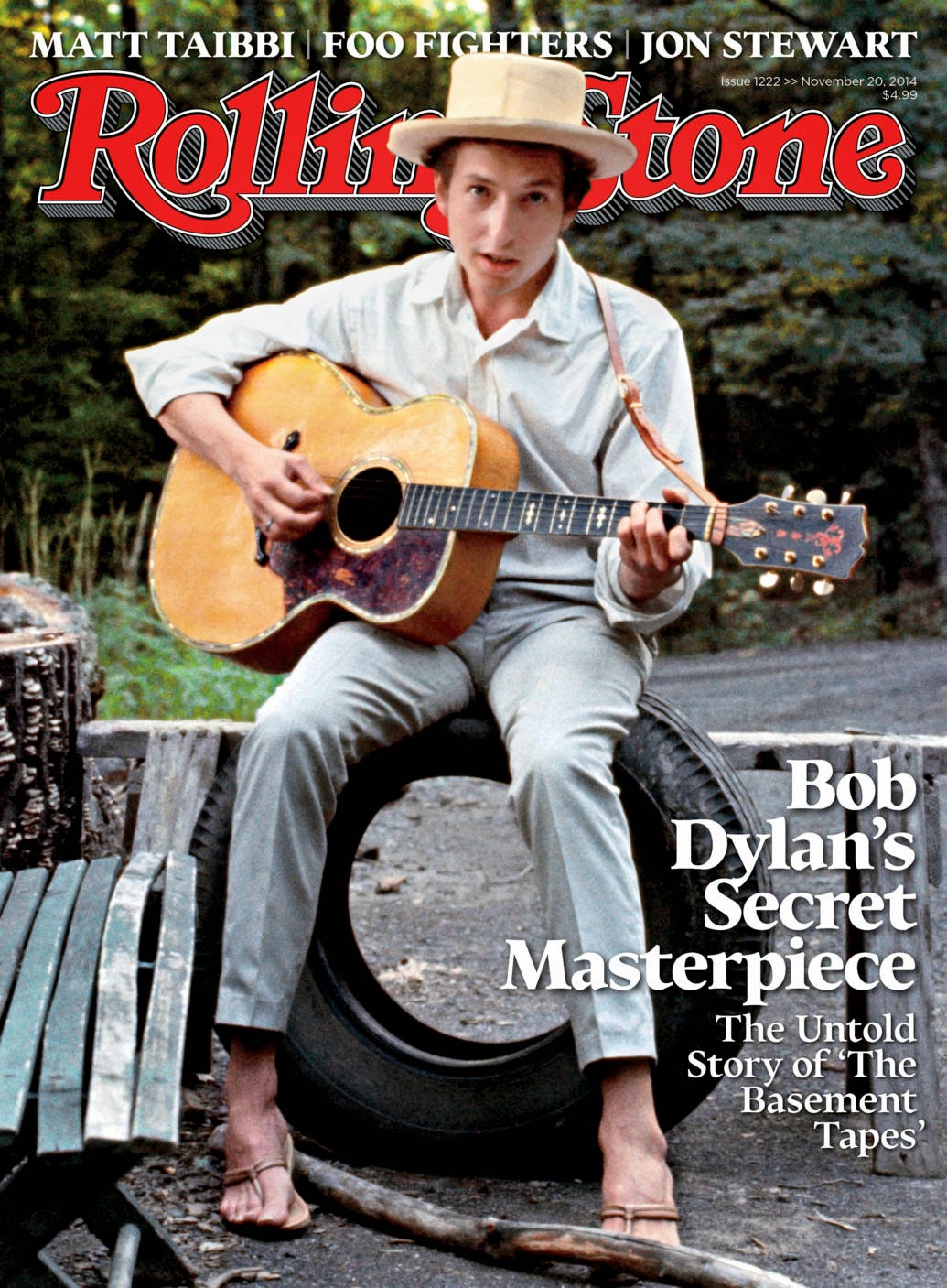 As he retraced the long history of the Basement Tapes, Browne spoke to Roger McGuinn, Happy Traum, Jim James, Sally Grossman (the widow of Dylan's manager Albert Grossman) and Canadian producer Jan Haust, who played a pivotal role in preserving the tapes and readying their release. Browne also spent the day in Woodstock with Garth Hudson, the organist in the Band who ran the tape recorder during the Basement Tapes sessions.
Rolling Stone even went a step further, bringing Hudson back to Big Pink for the first time since he moved out in 1968. As our cameras rolled, he spent hours walking around the grounds of the house, reminiscing and playing Dylan songs on the organ and piano. "It's way bigger than I thought," he said after stepping into the basement where the musicians crafted Dylan's secret masterpiece. "We'd be around, cleaning up or whatever, and Bob would come in. Bob didn't like to sing the same song over and over."
check it out here Rolling Stone

check out Garth's jacket!
Posted by Andy Swapp at 11:46 am 2 comments: