VINCE MARTIN - If the Jasmine Don't Get You ... The Bay Breeze Will - Plain & Fancy 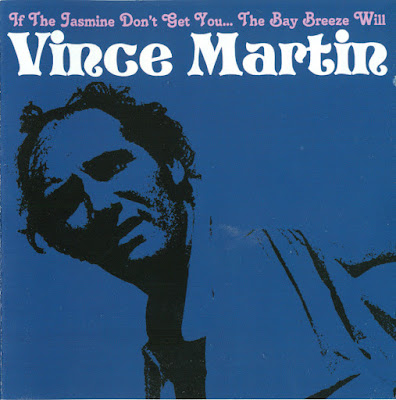 Well here's a delight . . . . . . . you know how someone used to burst into your house with an album under their arm and say "Hey, listen you really gotta hear this!" and you put another disc on the record player and sat back and got lost in reverie . . . . . it happened for me with John Sebastian, Tim Buckley (and his son Jeff) and Fred Neil and many more . . . . . people we hadn't necessarily heard of and another vinyl album hit the deck and we were gone . . . . . . so Plain and Fancy has done us proud with this latest posting with this from Vince Martin who I confess I had never heard of! But downloaded anyway and what it pleasure it has proved  . . . my song of the day must be his Snow Shadows and the Rockasteria provides his usual interesting notes to boot:

"Vince Martin first emerged in the late 1950s as a folk-blues singer around Greenwich Village...of the tendency which kind of avoided the academic approach. A friend of commercial folk-pop group The Tarriers, he was the lead singer on their 'Cindy Oh, Cindy' 45, a monster hit and one of the first real big successes to emerge from the Folk Boom. Vince, lending not only a gritty edge of authenticity, but a note of wistful yearning no amount of study can bring, in the early 1960s, gravitated toward the intense club nights presented by black activist and broadside editor, Len Chandler. Starting a celebrated partnership with fellow maverick Fred Neil which stretched over live appearances which influenced a generation, David Crosby, Mama Cass, Richie Havens, you name them... and cutting an acclaimed and now-classic album for Elektra.
It was Vince who started the to-ing and fro-ing of the folk scene players between Greenwich Village and Florida's Coconut Grove (*see below), a place he discovered by chance in 1961, later immortalized in a song by Fred Neil covered by everyone. All of this is perfectly captured on Vince Martin's 1969 album, If the Jasmine Don't Get You ... The Bay Breeze Will, one of that decade's overlooked gems, and a record whose title truly says it all, and whose time has come. From the opening cut, 'Snow Shadows,' the sound is an airy blend of folk spirit and rock dynamics. Softly brushed drums push forward behind propulsive flat-picked twin acoustic guitars; Martin's high tenor sings of romantic loss, quivering over the lines 'Stumbling through the snow..../Nothing waitin' for me like I'm leaving behind..../Cities are meant for leaving before I get too black and blue.'
As the song builds, the drummer dramatically downshifts, cracking his snare with a full stick. Martin's voice in turns seems to lift off with a thrilling effect, soaring, as he croons, 'Heading south without you like a wild bird flying blind/Someone should have told me I'd never go home.' Produced by infamous A&R man/producer Nickolas Venet at Capitol's studio in Nashville, Tennessee, this record came in out on Capitol releases which included Euphoria, Gandalf, and Karen Dalton's self titled album... strange company indeed"