Monte Hellman, whose terse action films, epitomized by the 1971 road movie “Two-Lane Blacktop,” made him a cult hero of the American independent film movement, died on Tuesday in California. He was executive producer on Tarantino's 'Reservoir Dogs' amongst other things and seems to have tried to use the incomparable Warren Oates in every movie he ever made! He was 91. 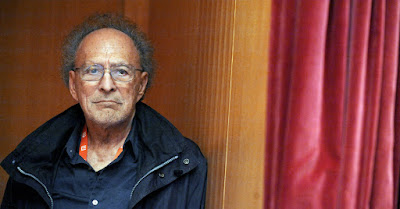 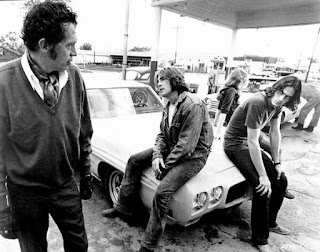 Warren Oates, as G.T.O., confronting Dennis Wilson, James Taylor and Laurie Bird in a scene from the movie “Two-Lane Blacktop.”

I loved this movie and not least because it starred two musicians in James Taylor and Dennis Wilson. I saw it when it came out over here and rate amongst my top thirty greatest films and curiously for me I love the petrol head roles in it and it ranks alongs 'Duel' as one of my favourite road movies of all time (Easy Rider etc)  I dreamed if ever I owned a car it would look like this . . . . . . . 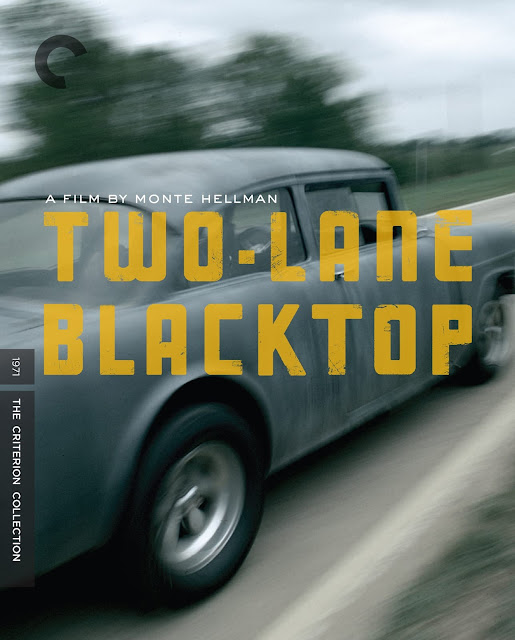 Monte Hellman’s Two-Lane Blacktop has four principal characters known only as “the driver” (James Taylor, a singer signed to the Beatles’ Apple label), “the mechanic” (Beach Boys drummer and sometimes composer Dennis Wilson), “GTO” (veteran film and TV actor Warren Oates) and “the girl” (novice actress Laurie Bird). “Oddly enough, the only one who sang in the picture was Bird, and she couldn’t sing,” notes Hellman. It was, instead, a road film about a two-car transcontinental race down old Route 66, all the way to Washington D.C.

The mechanic, hands in his pockets on a blustery autumn night, watches carefully as the beefy guys in the embroidered car-club jackets shine flashlights on the big block 454 of the primer-coated, innocent looking ’55 Chevy (except for the sheet metal covering the tunnel ram intake manifold with dual quads protruding through the hood).

With everything checked out, the driver guns it briefly to warm up his pair of oversized Firestone racing tires as an opponent next to him does the same. The fat guy in front of them turns on a flashlight, and they’re off in a cloud of exhaust, tortured rubber and the deafening howl of powerful engines, down a quarter-mile run. Before the pay-off, the siren of an LAPD squad car, screaming toward the impromptu dragstrip, abruptly ends the evening for everybody.

The ’55 Chevy pulls up to Mary’s Cafe somewhere in Arizona, so the driver and the mechanic can grab a bite to eat. With the juke box blaring out “Hit The Road Jack,” they down their sandwiches as a skinny girl in her early 20s climbs out of a panel truck with a garish mural painted on the side. She slings her duffle bag into the ’55 Chevy, then follows it into the back seat. The driver and the mechanic take off, completely ignoring the girl. Finally, she pipes up: “It’s really bumpy back here. What kind of car is this, anyway?” The pair in front says nothing. “You guys aren’t the Zodiac killers or anything, are you?” she asks. The mechanic turns around and says, “Just passing through.”

They pull into a small town in New Mexico for the night and cruise the main drag before finding a lime green ’32 coupe street rod parked at a Lyons Root Beer drive-in. Playing the hayseed card, the driver tells the coupe’s owner, “Gee, mister, I’ll bet it’s pretty quick.” The owner, in his 30s, balding with a mustache, says, “You wanna find out?” Dropping all pretense, the driver says, “Normally I’d jump at the opportunity, but I’m not in the habit of seeing the Chevy work against a two-bit piece of junk.” “Let’s make it 50!” says the coupe’s owner. The driver snaps back, “Make it three yards, motherfucker, and we’ll have an automobile race!” 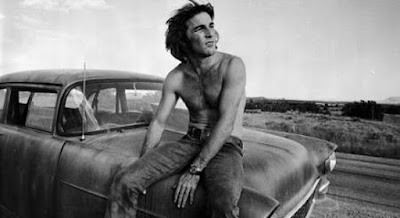