ANTIFA and The Battle of Cable Street 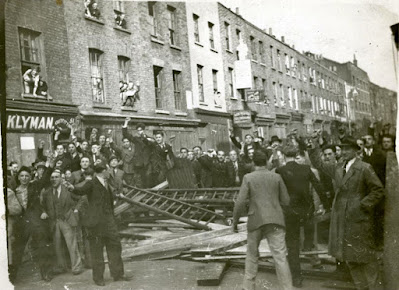 I object to the term 'Antifa' apart from being lazy language and a portmanteau at its worse, it allows for redefinition, disambiguation and misleading re-interpretations. The world wars were the common man's success against the Fascists of Germany, Italy and elsewhere, the Nazis in the Second World War of course and current usage allows for right wing pressure groups like Trump and his cretinous followers for Antifa to be mislabeled as urban terrorists. Amongst many ani-facist movements we celebrate the common man overcoming the fascists of Mosley's British Union of Fascists and Cable Street. What Anitfa is not is an organisation, a movement or website it is merely the people standing up to the rise of Fascism

Today is the 83rd anniversary of the Battle of Cable Street.  The Battle of Cable Street took place in the Whitechapel district of East London.  That community was heavily populated by working class Jewish immigrants from Eastern Europe and their British-born children, as well as Irish immigrants who mainly worked on the local docks.  In Oct of 1936, Oswald Mosley, mini-fuhrer of the British Union of Fascists announced that he and his blackshirts would hold a march through this community, calling for it to be “cleansed” of Jews.  Members of the Jewish community, union members, the largely Irish dockworkers and members of anarchist, socialist and communist groups vowed to stop the fascists.  Between 2- and 3,000 fascists marched, protected by 7,000 cops.  They were met by somewhere between 50- and 100,000 anti-fascist demonstrators.  Needless to say, the police, protecting the fascists, rioted, attempting to tear down the barricades the community had erected so as to allow the fascists to continue their march.  Police used their truncheons to beat anti-fascists demonstrators.  The community responded by pelting the police and fascists with rubbish, dumping chamber pots on them from windows, and fighting back with their fists.  Eventually, the police and the fascists withdrew.  The Battle of Cable Street was won by the anti-fascists, and it is today commemorated as a great victory by unions and leftists in the UK.