As well as losing Bunny Wailer yesterday and losing toaster U Roy late last month we lost another legendary ground breaking musician. Now I didn't probably appreciate Chris Barber enough until hearing about his contribution to skiffle through the work of Lonnie Donnegan around the time of his album with Van Morrison who revisited that legendary tradition musical source of folk music ( for that was what it proved to be) and 'trad jazz' as it was called had left me somewhat cold at the time, just more white folks playing black music of origin to these ears but he deserves closer inspection and I read Billy Bragg's wonderful tribute to him. 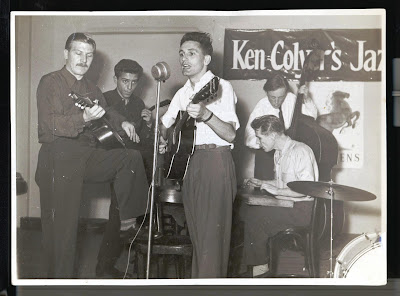 "Sorry to hear of the death of Chris Barber, one of the giants of the UK jazz scene, but also a founding father of British guitar-based pop and rock. He played a crucial role in the birth of the skiffle movement. In the early 1950s, he was the trombone-playing leader of a trad jazz band that featured Lonnie Donegan on banjo. When they came to record their first LP 'New Orleans Joys' on 13th July 1954, his commitment to African-American roots music meant that he was happy to play double bass on Donegan's recording of 'Rock Island Line'.

When this cover of a Lead Belly standard was released as a single in December 1955, it ignited the skiffle craze in the UK. In the following 18 months, sales of guitars in the UK rocketed from 5,000 in 1955 to 250,000 in 1957. Skiffle proved to be the nursery of for the British rock stars of the 1960s. Chris Barber continued to influence the UK scene by inviting US blues artists to tour with his jazz band, bringing the likes of Big Bill Broonzy, Muddy Waters and Sister Rosetta Tharpe to British and European audiences.

In 2015, at a concert celebrating the music of Lead Belly, I shared a dressing room with him at the Royal Albert Hall where he regaled me with tales of seeing Broonzy open for Mahalia Jackson in the early 1950s. Knowing of my interest in skiffle, the organisers had invited me to sing 'Rock Island Line' and I was greatly honoured that night to have Chris play double-bass on the song.

He was a real gent and his influence on British rock music of the 50s and 60s was immense. He's pictured above playing double bass during a skiffle breakdown session in 1953 with other founding fathers."

A favourite from the Skiffle Sessions - Good Morning Blues
Ken Colyer's Jazmen - Lonnie and Chris Barber
Another favorite song Chris Barber and His Jazzmen - It's Tight Like That!
Good Night Irene
Posted by Andy Swapp at 3:09 pm