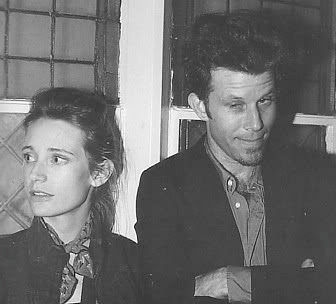 Tom Waits on Kathleen Brennan, his key creative collaborator who has co-written most of Waits songs since the 80s: “We’ve been working together since Swordfish… I’m the prospector, she’s the cook. She says, “you bring it home, I’ll cook it up.” I think we sharpen each other like knives. She has a fearless imagination. She writes lyrics that are like dreams. And she puts the heart into all things. She’s my true love. There’s no one I trust more with music, or life. And she’s got great rhythm, and finds melodies that are so intriguing and strange. “Most of the significant changes I went through musically and as a person began when we met. She’s the person by which I measure all others. She’s who you want with you in a foxhole. She doesn’t like the limelight, but she is an incandescent presence on everything we work on together.”Brennan is notoriously publicity shy, but deserves more recognition.*

Brennan and Waits met in 1979 when Waits made his acting debut in 'Paradise Alley' and then during the filming of the Francis Ford Coppola film 'One from the Heart' still a favourite film and top soundtrack for me. Waits was composing the original soundtrack for the film, while Brennan worked at the film's studio, American Zoetrope, as a script analyst

*from the brilliant Floyd The Barber https://mouse-trap-replica.tumblr.com